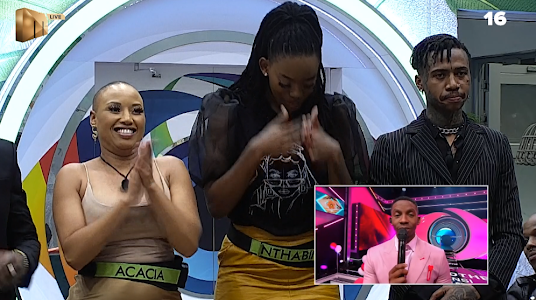 Another Sunday, another episode of Big Brother Mzansi. There aren’t many things we can be confident of with Biggie’s twists, but we did know one thing: someone was coming home. We didn’t know who or how many would be leaving, but the fact that someone would be leaving was firmly established.
See Video:
The show focused on a variety of events from the week, as is customary – the first Wager Task win, for example, Sis Tamara becoming Head of House, Yoli collapsing during the Nomination sessions — it was all on display.
For the Nominated Housemates, there were a few difficult moments.
Mphowabadimo’s relief was palpable when she learned she was safe.
Nale, on the other hand, seems unaffected by the news that she would be staying in Biggie’s House for at least another week.
There isn’t a trace of emotion anywhere. 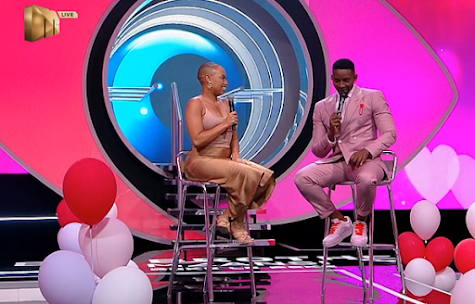 Of course, someone did return home, and it was Acacia. She looked stunned when she heard the news, as if she couldn’t believe what she was hearing. Her relationship with B.U., Venus, Yoli, and Themba has deteriorated recently, and she’s had arguments with them. It’s safe to say she would have been Nominated again if she hadn’t been voted off tonight.
She appeared to have regained her composure by the time she made it out onto the stage for her interview with Lawrence. She made no apologies for being confrontational, and she expressed her opinions about B.U. to Lawrence. To be fair, he did inquire, but it appeared like she didn’t require much prodding. She also mentioned that she thinks Venus will win this whole thing.
However, she was able to leave with a spring in her step. It’s natural that the prospect of being able to see her daughter was a driving force. We wish her the best of luck.
So, what’s next? Now all we have to do is wait for tomorrow’s Head of House Games and the inevitable Nominations that will follow. During the Nomination Sessions, there is a lot of stress, which tends to encourage retaliation in the form of naming names.

One thought on “This is what transpired tonight on the eviction show on #BBMzansi.- Video”